Getting In
Doug Green
1 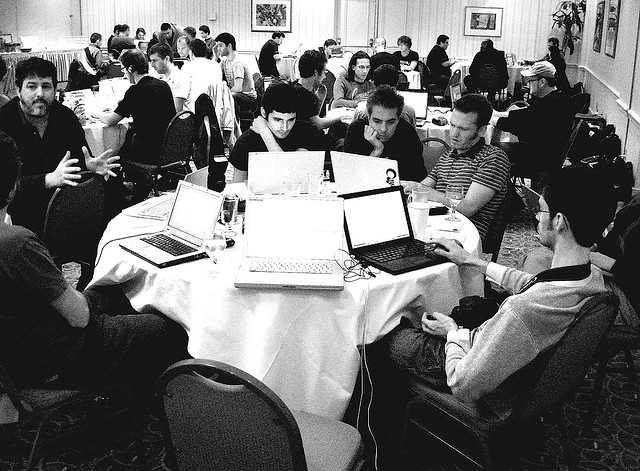 Drupal people are good people. They are the recipe’s secret ingredient, and conferences are the oven. Mix and bake.

March 2007, Sunnyvale, California, the Yahoo campus and a Sheraton.

OSCMS, my second Drupal event and my first conference.

Dries gave the State of Drupal keynote, with a survey of developers and a vision for future work. His hair was still a bit punk and he was a bit younger. Dries has the best slides. Where does he find those amazing slides?

I wish I had created Drupal.

In 1999, I created my own CMS named Frameworks. I remember showing my friend Norm an "edit" link for changing text and how cool that was. Back then, I didn't even know about Open Source – despite being a fanboy of Richard Stallman and the FSF – and I was still using a mix of C/C++, Perl, and IIS. (If you wanted to eat in the 1990's, Windows was an occupational hazard.)

But I didn't create Drupal. I didn't have the hair, I've never had those amazing slides, and I will never be able to present that well.

But mainly, I didn't have the vision.

Rasmus Lerdorf gave a talk on the history of PHP. I was good with computer languages. I had written a compiler in college, developed my first interpretive language in the late 1980's and another one in the early 1990's. I wondered why I hadn't created PHP. At the time, most web apps were written in Perl. I loved Perl. It was so concise. It was much better than AWK, which in itself was also pretty awesome.

(Note: AWK does not stand for awkward. It’s named after Aho, Weinberger, and Kernighan – of K&R fame).

So I didn't see the need for PHP, we had Perl!

That week, I co-presented my early work on search. The presentation was not ground-breaking; something or other about how I was using views and exposed filters with search. I was nervous presenting for the first time. I wanted to belong and I wanted validation that what I was doing was good. But I was also nervous because I had never met my co-presenter, Robert Douglass, I didn't know what he was presenting, and I didn't know how our talks were going to merge.

The presentation went fine, probably better than fine. Robert was very kind and very gracious. My fragile Drupal ego got a small boost that day.

Also, I first met Charlie (“ChX”) at a talk he gave on the menu router optimizations. I already knew him by reputation from the Drupal developer mailing list and the issue queues. I liked ChX. He impressed me. Here was a nice, smart guy. I didn't know how smart until that week; I didn't know how nice until later.

I gave a lightning talk on the coder module. I was excited about coder. Maybe I finally had a vision.

I attended the one-day performance workshop after OSCMS, where Robert talked about Memcache, and Jeremy Andrews (Drupal Watchdog editor-in-chief, and my boss) talked about SQL. I think the Lullabots and Angie presented, and there was one additional talk. Before Twitter, and before live blogging, I live-posted all day (type-type-type, save... type-type-type, save...) to the CivicActions wiki.

I attended the hackathon in the Sheraton ballroom. I was a week behind on client work and wasn't getting paid while at the conference, so I started the day with my day job.

ChX announced, in his Hungarian-accented English, “If you want to work on core, see me, I give you work.” Five minutes passed and I came to my senses. I walked up to ChX and said, “I can help, what can I do?” He responded, “What can you do?”

I gave him a short bio. And he said “Oh, you're douggreen, you wrote coder, frickin good idea! I give you something hard.”

And that was it!

Ron Brawer
Were you there? Then you may be in these pages. Our intrepid reporter investigated DrupalCon and returned with lots of interviews. But no tattoo.
0
Coming Soon

Angela Byron
You need a mobile web app. No, you want – you deserve – a mobile web app. But considering the options – Objective C or Swift for iOS, or Java for Android – you’ve been procrastinating. Well, developer, wait no longer!
0
Coming Soon

Kelly O'Brien
You built an awesomely gorgeous website. All that remains is to write the (ugh!) user manual. No, you cannot first watch all 800 episodes of Dr. Who again.
0
Coming Soon
END_OF_DOCUMENT_TOKEN_TO_BE_REPLACED

Interesting post...It's really interesting to be a Drupal person.