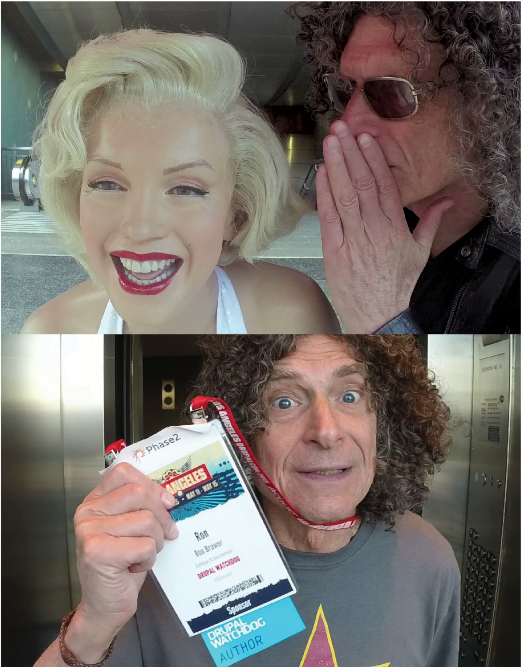 EXT. HOLLYWOOD, AN OFFICE BUILDING
(HOWARD exits the building in a huff, speaking on his cellphone.)

HOWARD: Gary, no more interviews!.... Baba Booey, listen to me, no more! (He looks around.) And where’s the car?... Where am I? I’m on... (freaking out) Oh, God, Hollywood Boulevard! (He is immediately set-upon by throngs of adoring fans requesting selfies.) Never mind, I’ll grab a cab!
(He disconnects and flees up Highland, frantically waving his hand to hail a taxi. Finally, a taxi stops and he rushes inside.)

INT. WESTIN BONAVENTURE, RONNIE RAY’S HOTEL ROOM
(RONNIE examines himself in the full-length mirror, confident that he is prepared to face the day at DrupalCon LA. In fact, he’s the very model of a modern major network newscaster, albeit more hairy and clueless. So here he is, showered, combed, and nicely dressed. He slips on his Drupal Watchdog ID tag and stands straight and tall. He thinks, “Okay, interviews today with Morten, Nate and Jen, maybe Fabian, maybe Angie.”)

[EDITOR’S NOTE: Ron, it’s a movie, how do we know what the character is thinking?]
[NOTE TO EDITOR: Jeremy, a great actor can express thoughts without words. To play me – I mean, “Ronnie” – my agent is negotiating with CAA for Clooney, Brad Pitt, or, in a pinch, Jack Black. But if it’s stressing you out, “Ronnie” can just mutter to himself.]

(He grabs his clipboard and heads out into the hall.)

INT. WESTIN BONAVENTURE, LOBBY
(Howard strides into the hotel and looks around for the yellow elevator bank.)

INT. WESTIN BONAVENTURE, ELEVATOR
(Ronnie gets on an elevator, which is round in shape: half of it is glass-enclosed and offers a spectacular view of Hollywood.)

INT. WESTIN BONAVENTURE, LOBBY
Ronnie exits the elevator just in time to spot Howard getting on a neighboring elevator.)

RONNIE: (muttering to himself) Oh my God! (Ronnie quickly steps onto Howard’s elevator. As the doors close...)

RONNIE: Howard! I bet you’re in LA for DrupalCon!

HOWARD: (Backing nervously away) What?
(The elevator rises.)

RONNIE: Did you know, this is the exact same elevator where they shot that scene from True Lies, with Arnold on the horse?
(Howard nods, humoring him.)

RONNIE: But did you also know that they had to shoot the scene over and over again because the horse had terrible diarrhea?
(Howard shrugs, thinking “Who is this mashugana?” and “How do I get out of here?)
[EDITOR’S NOTE: Ron–]
[NOTE TO EDITOR: –Okay!]
(Howard whips out his cellphone and speed-dials.)

RONNIE: So tell me, is your website built on Drupal?

HOWARD: RuPaul? He was on my show one time.

RONNIE: Drupal. Oh, I get it – funny. (Ronnie consults his clipboard for a second, then continues.) Howard, if you don’t mind my asking, could you love a woman who practiced open source?

HOWARD: I’m married, I don’t do that anymore.

RONNIE: Do you think Drupal’s front end is too far up its backend?

HOWARD: Look, I don’t want to be interviewed, okay?

RONNIE: Final question: what’s your favorite emoji to use in a GitHub pull request?
(Before Howard can respond, the elevator slows and stops.)

HOWARD: This is my floor.

RONNIE: I wouldn’t miss it.
(Howard edges past Ronnie, cautiously reassuring him.)

HOWARD: Okay, then, I’ll see you in Barcelona. We’ll walk on the beach. We’ll do lunch. We’ll drink sangria.

RONNIE: Awesome!
(Howard makes his escape and flees down the hall. Ronnie leans out the elevator, waves, and calls after him...)

Building a Publishing Workflow with Workbench

Sweta Shahi
To Test or Not to Test... Test!
1
Coming Soon
END_OF_DOCUMENT_TOKEN_TO_BE_REPLACED
Coming Soon
About the author: