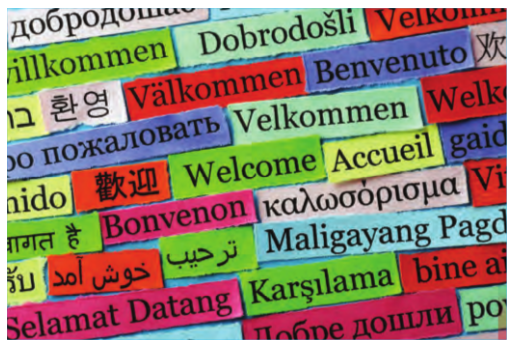 If that was the most polite thought that crossed your mind when dealing with the Drupal 7 Field API, please read on.

No matter whether you build complex multilingual sites, or whether just hearing the words “Drupal” and “language” in the same sentence makes you want to hide in the darkest corner of your office, there are a few language-related notions that you really need to know to write Drupal 8 code that works properly. After all, language is an intrinsic property of textual content, and since Drupal is supposed to manage content, having to deal with language does not seem such a peregrine idea, does it?

Historically, content in Drupal is a user-friendly way to refer to nodes. However, in Drupal 8, content has a broader meaning: it refers to any entity type which stores information usually meant to be experienced in some form by a certain set of site users.

Content entities, such as nodes, comments, terms, custom blocks, custom menu links, and users, are all examples of this kind of entity type. The other main category is Configuration entities: node types, views, fields, menus, and roles, are meant to store information mainly related to determining the site behavior. Note that this distinction may not always be so clear-cut, as in some cases the choice of picking one category or the other may be determined mainly by implementation details, as in the case of module-provided menu links.

To sum up, when in Drupal 8 we speak of content, most of the time we are referring to content entity types.

In Drupal 7, a new way of translating content was introduced by adding native multilingual support to the Field API. That allowed the ability to store multilingual values for any field attached to any entity type. But code that implements business logic needs to explicitly deal with field language, which implies a very poor developer experience (DX); i.e., this infamous field data structure:

Unlike the $delta and $column levels, whose values are predictable, deciding what the correct value should be for the $langcode level is definitely not trivial. In fact, depending on whether the field is translatable or not, it may hold an actual language value or LANGUAGE_NONE. Dealing with a translatable field in Drupal 7 can be accomplished in two different ways, depending on the business logic being implemented:

Dear developer: As you may have guessed (or learned the hard way), figuring all this out is your responsibility. (Ouch!)

One of the reasons dealing with field language is so hard in Drupal 7 is that, despite all the work that went into designing and coding the Field API, core does not provide a full-fledged Entity API to build on. As a consequence the Drupal 7 “Entity Language API” is an inconsistent mess spread in three places:

In Drupal 7 we have two competing models to translate content:

The main reason why the field translation model was introduced is that the node translation model, although easy to implement and support on a superficial level, has several drawbacks when trying to deal with more advanced use cases, in particular when needing to share data among translations.

Another issue that can be problematic when building a website that needs a high degree of symmetry among the various language versions, is that identifiers are different for each language.

Last but not least, we need to translate any entity type, but extending the translation set approach to work universally is definitely not a trivial effort. On the other hand, aside from the DX issues, making field translation work properly does not turn out to be an easy task either. In fact, all non-field data attached to entities is not supported, and requires a workaround like the Title module, that allows us to translate entity labels.

In fact, having two models in core is a bad situation: site builders have to pick one, developers have to support both, and everyone has to understand both. This leads to additional cognitive, operative, and maintenance burdens, that in many cases make building a multilingual website in Drupal 7 a painful experience. In Drupal 8, we faced the need to resolve this “conflict” and provide a single content translation model. The solution we found is a unified model: if every piece of data is a field we can replicate the node translation model by making every field translatable. The only difference is that we have a single entity for each translation set.

The content translation UI is very similar to the Drupal 7 one: the main differences are the source language picker and the labels indicating that a field is not translatable. 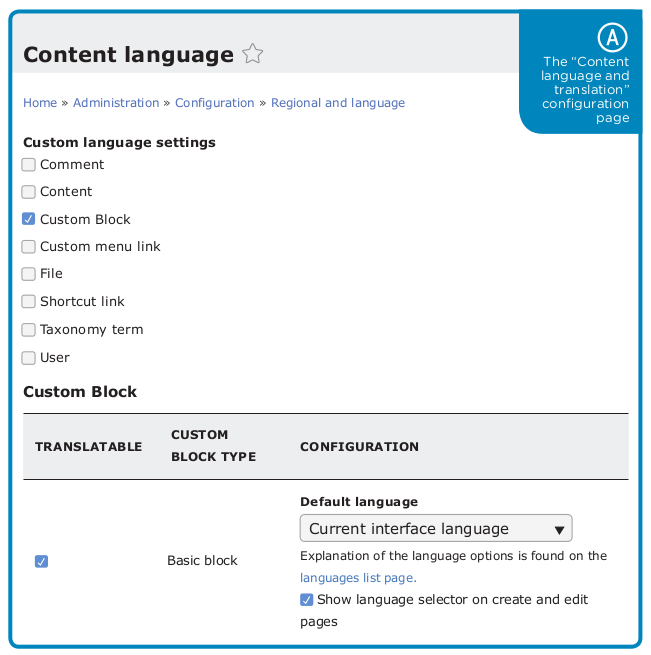 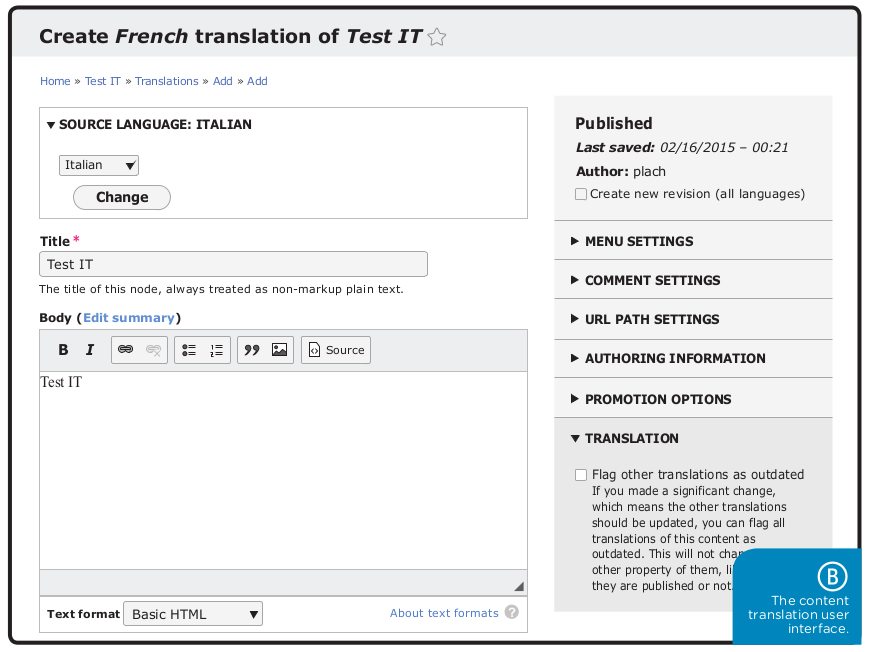 The table layout for translatable and revisionable entity types

The main obstacles toward making every piece of data a field (and making it translatable) in Drupal 7, were the huge DX issues mentioned above and, above all, the lack of a storage layer supporting multilingual values for any field.

In Drupal 8, we can rely on a solid core Entity API that exposes entities as classed objects, and thus allows us to encapsulate all the complexities involved in dealing with field translatability. We also have an Entity Storage layer that provides a unified way to load and store field data in a storage-agnostic fashion. This means entities can be stored in an SQL database (the default implementation), as well as rely on MongoDB or an XML storage; the decision is totally up to the current storage handler. This also means we can bake native multilingual support into each storage handler without needing to touch any other part of the Entity API.

When entity translations are added to or removed from the storage, the following hooks are fired:

The default SQL implementation distinguishes between base fields – which are attached to any entity – and bundle fields – which are attached only to certain bundles. The former are stored in the entity shared tables; the latter, as well as base fields with multiple cardinality, are stored in dedicated field tables. While field tables natively support multilingual values, exactly as in Drupal 7, for shared tables, four different layouts are supported, depending on the entity type definition:

The Entity Query API does not make any assumption on language conditions:

Shut Up and Show Me Some Code

Being able to store multilingual values for any piece of content is great, but is that enough? Smart readers will have guessed the answer at this point, I suppose.

Although many of the intricacies of dealing with field translatability have been hidden below the ContentEntityBase rug, developers still need to keep in mind that any entity type may find itself operating in a multilingual environment sooner or later, so the related business logic should be coded accordingly.

This means that we no longer need to worry about field translatability, which is pretty relieving, to say it politely.

In Drupal 8, every translation is an entity object with its own language; we only need to pass it around, as we’re already used to doing, to make the active language available in any part of our code base.

As you can see, in Drupal 8 entity_do_stuff() can be completely language-agnostic, unless its business logic explicitly deals with language, which can be retrieved form the entity (translation) object.

In Drupal 7, the only way to determine what translation should be selected among the available ones, is by calling field_get_items(), which tries to determine which translations are available by inspecting field values through field_language(). If a field translation is missing for a certain language, field_language() will return a fallback value, which may lead to having different languages for different fields, a confusing and unintended behavior. When writing this code we assumed that all field translations would be in the same language.

Additionally, this behavior makes sense only in a rendering context; applying field language fallback in a save context would cause non-existing translations to be stored. In Drupal 8, we fixed this mess by introducing the concept of entity language negotiation and applying it to the whole entity object. Then we inspect available entity translations and pick the one that most suits the available contextual data. For the rest, this means empty values are just treated as such, instead of triggering field-level language fallback.

This API is not limited to entities, but contextual data allows us to tell when entities are involved. In fact, the entity object is always part of the contextual data. The default operation (entity_view) works correctly for view builders and form handlers. Entity language negotiation is automatically applied to entities being referenced in the current route's path (e.g., node/1), so in these cases there is no need to explicitly instantiate a translation object: the correct one is provided by default. The same is true for all the hook_form_alter() implementations and the various callback functions involved in entity form building and entity rendering.

If your code explicitly needs to deal with translations, and it needs to act on all translations instead of just dealing with the active one, there are a few useful methods to help with that.

Okay, this sounds great (hopefully), but is it really as cool as it sounds?

Not yet. There is some more work to do to make all of this perform flawlessly:

To sum up, even if some care from developers is still required when designing and coding a functionality that may end up operating in a multilingual environment, we truly believe we built a system far superior to what we have in Drupal 7, a system allowing us to minimize the effort required to make things simply work properly.

So what you are waiting for? Make Drupal 8 shine even brighter!

Frédéric G. Marand
As the field of website auditing expands and comes to resemble financial auditing, it’s time to employ a code of standards and ethics. Here’s why and how.
0
Coming Soon

Brett Meyer Stephanie Gutowski
Although 90% of the data humans ever created may have been generated in the past two years, great content is not enough. Your organization needs a plan, with defined goals and an understanding of your audience; content provides the connection.
0
Coming Soon
END_OF_DOCUMENT_TOKEN_TO_BE_REPLACED
Coming Soon
About the author: